KITSET LIGHTING - FOR ANY SPACE AND EVERY SHAPE

Coral was David Trubridge’s first lighting design, designed in 2003 and first shown in Milan in 2004, and is now considered a design classic. Coral is the iconic Trubridge design, and is the most popular design in the range. As with many of Trubridge’s award-winning designs, the Coral pendant was developed through play. Trubridge is a firm believer that open-ended playing with no immediate goal or objective in mind can often lead to breakthrough moments in design. The Coral is based on one of the geometric polyhedra that have interested Trubridge since he was a boy. He developed the design over years experimenting with different materials and construction techniques before coming up with the current lighting design, which has maximum impact using minimal materials.

In the ingenious CORAL design, 60 identical component pieces are CNC cut from flat plywood, which when assembled are bent in 3 dimensions to create a sphere. The negative space is a series of pentagons, diamonds & kites that cast dramatic shadow patterns. Shadows can be enhanced or diminished via lamping and proximity to surfaces. 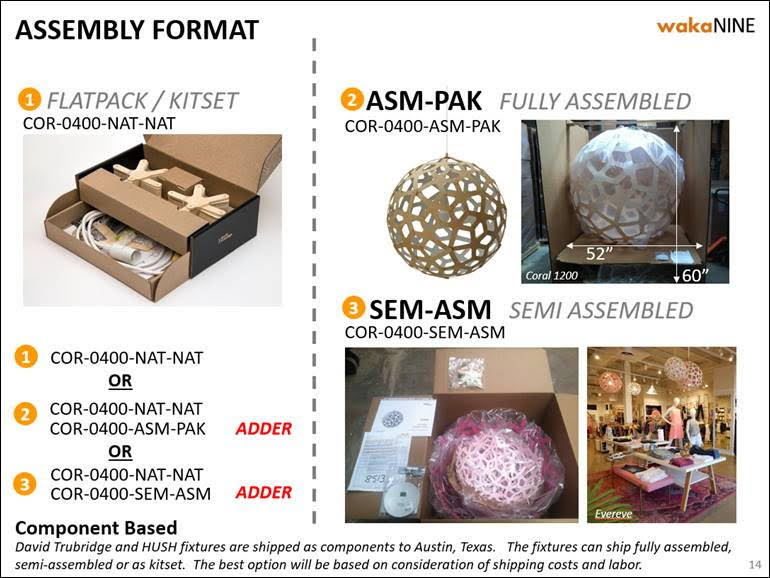 - Easy assembly at home via PDF or online video

- Available in a wide range of sizes

How did we curate this product?

While there’s no universal standard for sustainable manufacturing, Living Deep is committed to supporting brands, makers and manufacturers that are on a ‘deep green’ path, making progress towards positive environmental and social benefit. As we consider how this product impacts our health and the health of all species, you can learn more about how we evaluate products, or keep reading below for our curation of this specific product...

Where does the product come from?

David Trubridge is award-winning lighting designer who specializes in sustainable lighting and green materials. The designer lighting company is proud to hold Life Cycle Assessments (LCA’s) and Environmental Product Declarations (EPDs) for their pendant lighting designs. Each hanging light fixture has a story and connection to nature, while making a stunning and unique statement for any space.

Nature is the ultimate source of inspiration for David Trubridge, and his special interest in nature’s patterns is evident in Kina (Maori for Sea Urchin), designed in 2005. In 2004, Trubridge traveled to Antarctica on an artist fellowship program in conjunction with Creative New Zealand.

What is it made of?

Where does it go at the end of its life?

Bamboo is a wonderfully sustainable resource. David Trubridge’s collection uses a plywood bamboo produced as a by-product of the food industry that is supported by an Environmental Product Declaration (EPD) which provides detailed information on the product materials, production processed, energy consumption and end of life.

To dispose of, you can either reuse the pieces of bamboo for different purposes and enjoy their service for more days or, you can nourish the environment by composting the pieces.

The impact was lasting, as Trubridge describes it:

"I saw a minute kina shell dropped on the ice by a bird. The shell had absorbed enough heat from the sun to melt a little of the ice around it, causing it to settle into its own miniature blue ice cave. This taught me the vital importance of detail. It showed me how I can use my camera and telephoto or macro lenses to isolate just these details. In this way I can home in on the essence and structure of the landscape. This is where the truth lies – not the panoramic sweep of everything and nothing, but in its smallest component parts. These are patterns and structures of nature and of life – and they led me to understanding the patterns and structures of designs."

There is no related products to display.